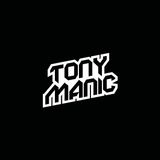 30 years behind the decks and still rocking - Tony Manic is no wet-behind-the-ears novice. Passionate about great melodies and not so much for particular genres, he plays almost all styles of electronica even though he is somewhat partial to uplifting house music anthems.
Playing clubs and raves in a number of countries and being passionate about bringing surprises to his DJ sets, he has managed to spice up his electronic sets by getting skinheads dancing to The Spice Girls and die-hard ravers dancing to The Cure, and generally you can find anything from Underground Resistance and Depeche Mode to Swedish House Mafia and Tiësto in his DJ sets.
With his DJ’ing, own productions released on labels such as Additive, Coma and Flex, being a club manager, organizing raves, working as a PR consultant for various record labels – and holding a degree in journalism – Tony Manic has been involved in more or less every aspect of the music industry through three decades.