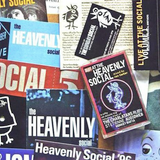 Never miss another
show from The Social

In 1999 The Social opened in Little Portland Street. The brainchild of a record company whose offshoots included a hugely successful underground club night, The Social was set up with a simple manifesto – to provide great music and better booze to anyone who fancied tripping through the doors.

Designed back then by a partnership of David Adjaye and Will
Russell (now of Pentagram) with the proviso of withstanding nuclear attack or – at the very least – the worst that people could chuck at it.

The Social has launched over a million hugely successful hangovers.