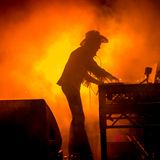 Never miss another
show from The Dastardly Bounder

Sultry and seductive, hot and heavy. 115bpm
by The Dastardly Bounder

Dastardly Shipwrecked 2021
by The Dastardly Bounder

The Dastardly Bounder is one of Jamie Larnach’s musical endeavours. His sound is influenced by three decades of DJing on incredibly loud sound systems for people who really like to dance. Jamie was an originator of New Zealand’s outdoor dance party scene, he bought us Entrain (New Zealand’s seminal rave), was a founding member of Splore and is the ringmaster of the infamous Doc Westie’s Bogan Circus.

After hearing The Dastardly Bounder playing at a underground gig Aum festival promoter Mossy publicly declared:
“If dance music is measured on how it makes you dance, then based on originality, depth, groove, complexity, humour, and the fact that I danced more moves in one set than I had ever done before, that was the best dance music set I have ever experienced.” John Paul Moss, 19 September 2016