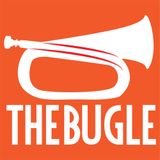 Never miss another
show from The Bugle

The Bugle is the ultimate pan-global audio home of international satire. The show is a weekly eruption of comedic comment about the world’s most, and least, important news stories.

Since it’s 2016 relaunch it has been hosted by Andy Zaltzman with his private militia of co-hosts including Wyatt Cenac and Hari Kondabolu from the US, Anuvab Pal from India, and, from the UK, Nish Kumar and Andy’s multi-podcast-award-winning sister Helen. Old co-host John Oliver may even show up every now and then.

After launching in October 2007, The Bugle has had many homes, but is now enjoying life in the Radiotopia stable