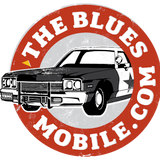 Never miss another
show from The BluesMobile Radio Archives

Elwood’s BluesMobile (formerly House of Blues Radio Hour) is a weekly syndicated program hosted by Dan Aykroyd as Elwood Blues, his famous character from The Blues Brothers. Since 1993, Elwood has showcased Blues and Blues-based music such as R&B, Soul, and Rock & Roll with featured guests ranging from B.B. King and Eric Clapton to Jack White and Sharon Jones. In February 2012, the program was re-branded as Elwood’s BluesMobile, with all programming remaining unchanged. In July 2017, the program was terminated and is no longer on the air. These episodes are from the radio show's extensive archives.