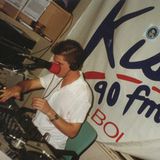 A Melbourne DJ from 1993 to 2003, playing at most of the city clubs of that era, including Chasers, The Warehouse, Inflation, Viper Room, Tatoo, Racquet Club and many other guest spots at clubs and parties. Tony also featured on a few Kiss 90 FM shows including "club lunch" and produced and ran the Bassline radio program with his brother Daniel Vid on Kix FM from 2001-2002. These days its the occasional mix at home for fun that gets uploaded here!