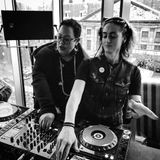 Never miss another
show from THE MDLZ

. Music is our religion and we are it’s host!

LADY DEEP brings the groove back to the dance floor with her fusion of melodic Deep to Tech House with a twist of Nu-Disco & eclectic Disco and funk edits both in the underground A’dam scene as well as at major festival.Lady Deep has played in front of thousands of partygoers in different cities.

Sarah May has had a link with music since she was a young girl. Instead of getting into sports in her early teenage years, she decided to learn to play the piano and the drums. In her dj sets are a magical pallet of sounds from Deep House, Tech House and Nu-disco to building it up and balancing it with the most raw dirty cuts with their own distinctive House grooves.
Nowadays, Sarah May spins in the best clubs in Amsterdam, Ibiza and corporate-private events. She’ s currently busy in the studio producing her first upcoming tracks.