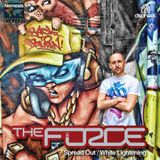 Never miss another
show from THE FORCE

THE FORCE is a producer and DJ from the UK that has worked with many of drum and bass’s leading labels. Since 2003 THE FORCE has released with D*Minds ‘Stereotype’, J Majik’s ‘Infrared’, EZ Roller’s ‘Intercom ‘ and Micky Finn and Aphrodite’s ‘Urban Takeover’ as well as Calypso Muzak, Shakedown, Sudden Def and Solid Ground.

In 2008 THE FORCE set up his own label, Rebel Bass Records. The first release ‘Welcome To Earth’ spent two weeks in Radio 1 and 1Xtra DnB Charts. The success of this was followed in 2009 by ‘Another World b/w Kill Ur Killer’ 2010s ‘Unmisstakable b/w ‘Maniac’ and ‘Demon Seed’ b/w ‘World of Dub’. Also in 2010 THE FORCE released a digital collection of his studio out-pourings titled ‘Pet Projects – Vol .1’ including two dubstep and two drumstep tracks.

Now in 2011 THE FORCE is planning a series of digital EPs that he will release on a regular basis starting with the ‘24.7’ EP due in shops soon.