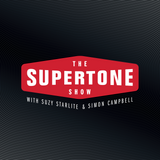 'The Supertone Show’ was a weekly, music-inspired chat show about songs and the people who make them.

Presented by European blues awards nominees Suzy Starlite & Simon Campbell of the Starlite Campbell Band, it features an eclectic mix of music from their vinyl collections, plus special shows focussing on inspirational people who have influenced and changed the sound of modern music. A 'must listen' for all music lovers and artists!!

Suzy and Simon have decided to take a break from the show as they need to to put all their efforts into recording new music and touring.

Suzy said: "It's been a real blast doing the show, we've learned so much and also made some fantastic new friends. Thanks so much for all your love and support over the past two years and we look forward to meeting you at a gig soon".

The 104 shows are still available on on iTunes, Mixcloud, Spotify, iHeart Radio and most streaming services.