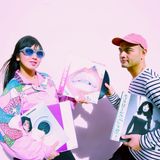 SunEye is a duo made up of Akiko and Hashim Bharoocha, originally hailing from Tokyo, Japan and now based in Los Angeles.
They make electronic music together, and as DJs they specialize in City Pop, Boogie & Funk from Japan, as well as vintage to modern J-Pop.
They have an internet radio show called “SunEye Radio” on dublab.jp, and a monthly DJ event at the Zebulon club in LA called “SunEye Presents: Tokyo City Nights”. They also have a label called Plant Bass Records.