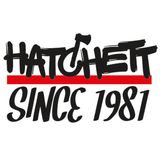 Never miss another
show from Hatchett

A veteran of Liverpool and Manchester club scene, Stewart Macleod has been DJing, promoting and most famously, caning it for a hot minute. Since the moment he arrived at University as a wide eyed teenager there was only one thing on Stewart’s mind... the rave. Whilst a degree in aerospace engineering masqueraded as motivation, it was Stewart’s love of floor driven electronica which would ring truest. Immersing himself in the underground establishments churning out the finest in dance music, be them Bugged Out!, X, Voodoo or Cream, Stewart quickly became fixated with the music. He soon acquired decks and a burgeoning Vinyl collection, teaching himself to mix funk, hip-hop, drum n bass and breaks he was buying with a rabid intensity, and set about ensuring he became more and more involved in the scene.