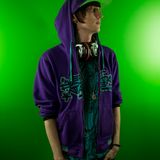 Originally from Los Angeles CA, Maxx Ammo has now made his place in beautiful British Columbia and has become part of the electronic music scene, and in the process he has made a large impression on the Outdoor Music festival and Club community.

Over the past couple years alone he has Headlined some of British Columbia's most popular Festivals and played alongside some of the electronic music scenes biggest names. His music productions has been on the Beatport Top 100 Release charts and featured on EDM.com and other major sites. He has even been making front page newspaper headlines!(Daily Carrier)

With his high energy and deep commitment to to entertaining, he has had the privilege to Headline with artist such as Noisia, Far Too Loud, Infected Mushroom, JFB, SNAILS, Flatland Funk, Stickybuds, SkiiTour, ShockOne and many more!