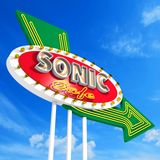 Never miss another
show from SonicCafe1

The Sonic Café… a little café in the Pacific Northwest… where we feature an intelligent mix of eclectic music, comedy and pop culture. The program originates on KYAQ radio and is also available on the Pacifica Radio and Radio4All networks where it, can be heard on affiliate community radio stations across the United States.

Scott Clark has always had a lot of music in his life. Growing up outside of Chicago, he was mesmerized early on by the radio of the sixties and seventies and began collecting records at a very early age. From 45’s and LP’s to cassettes and CD’s and now digital… he really never stopped.

You can find us on Facebook (facebook.com/SonicCafeRadio) where you can see complete show notes and playlist information as well as other posts pertaining to each episode. You can also email us at (SonicCafeRadio@gmail.com)

So kick back, and enjoy listening to the Sonic Café.