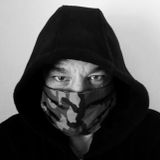 Small Paul was a founding member of Dagobah Sound System in Nottingham in 1997, inspired by Samovar and the legendary Desert Storm.
In 2000 Paul and the remaining Dagobah members created Pure Filth, a club night with a squat party feel.
After many years in retirement, Paul was drawn back to play for LDFM during the first 2020 lockdown and has been a regular on the station since.
Pure Filth has been revived on as a monthly show curated by Paul, featuring a lengthy list of quality LDFM residents and regular special guests. Paul has recently diverged from the strictly techno path and developed a breaks set to show a different side and has also been producing his own music which has featured on the station's Creator's Sessions shows.
Paul has so far had two of releases on Portugal's Toxic Recordings featuring a remix of Nick Samovar's Going Loco in 2016 and in 2021 a remix of label head, Echobeat's Transient Emphasis.