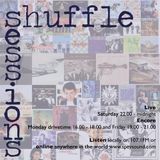 The ultimate war of chalk versus cheese; superman versus kryptonite; Garfield versus Odin. Cue dramatic music… Two ‘digital music service’ accounts collide in the ultimate battle of whose music collection is superior! Each week over two glorious hours we shall tease your lugholes with an eclectic mix from Audioslave to A-Ha, The Smashing Pumpkins to S Club 7 and anything and everything in between as we try and figure out just who does have the better music taste!

We also take a weekly trip to catch up with Lucas Marti from Argentina., who will bring a interesting choice of music with him.