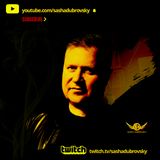 Was born in the USSR during the era of deep-seated communism.
He started his music adventure at the age of 6, when he went to a music school. After Mozart, Chopin, or Tchaikovsky, he started to be fascinated with electronic music, that resulted in the first school discos leaded by him. As a result of political turbulence he emigrated to Poland to feel fulfilled working as a DJ. The year 2000 was the beginning of his official career in DJs' that are ranked leading positions keeping charge. After many years started with a music production. As a result in a cooperation with the top trance polish producer he released official remix for one of the song of new Tiesto's"Caleidoscope" album called "Feel It In My Bones" and other releases. In more than 16 years career he played on many festivals in Europe with the biggest artists on the world. Music played by Sasha, as he says, is the form of communication with clubbers via universal language, that is known in every place of the globe - Music