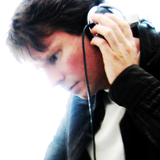 Never miss another
show from Sandero

Sandero's fascination with electronic music like Kraftwerk and Jean Michel Jarre began when he was young. By the time (Acid) House music was emerging in the late 80s, he was active in this music scene.

They later joined with The Hague’s well known station 'Radio Centraal 92.2', until 2000 their broadcasts continued under the name 'Radio Centraal 2 FM'. This was a common way of airing music in their hometown, The Hague. The format was a unique combination of Acid, Underground and (Progressive) Trance.

Sandero has been playing Progressive and Trance at local gigs since 2000. He can also be heard globally on Digitally Imported Radio (DI.FM) Vocal Trance channel with his show 'Secret Voices', every first Monday - 20:00-22:00 CET.

Sandero's work is available for free on his website.
www.sanderomusic.com