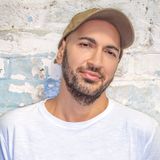 Never miss another
show from Rodge

Rodge is a name most clubbing aficionados of the world know and respect. His success in the Middle East has become legendary, netting him the opening slot at major concert events, including
Justin Bieber, Ed Sheeran and Jennifer Lopez in Dubai as well as Sia, Sean Paul, Shakira, Chris Brown, The Chainsmokers, Enrique Iglesias, Jason Derulo, Bryan Adams, David Guetta, Kygo, Armin Van Buuren, just to name a few. Moreover, he played at Pia Mia’s Birthday Party in Hyde, Las Vegas.
A born perfectionist, Rodge is driven by an undying passion for music. He launched his own radio station in 1996 and Mix-FM has since helped shape the musical landscape of Lebanon. It also serves as a springboard to his ever-increasing fame throughout the Middle East. His massive following insures packed houses at every performance. Easily the most celebrated DJ in the region, Rodge has multiple weekly residencies in Lebanon like Thursdays at BO18 Beirut, Fridays at The Village Dbayeh, Saturdays at Igloo Mzaar.