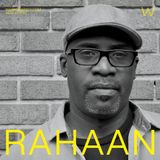 Feelin' You
by Rahaan Rah

Home Doing What I Do
by Rahaan Rah

DJ Bookings: ali@warmagency.com
Hailing from Chicago, the city which gave birth to House music Rahaan has been spinning house and disco since the 80’s when he started playing at house parties across the city.

In the 3 decades since Rahaan has become a Chicago legend, a DJ who is widely recognised for his exceptional skills behind the decks and his exquisite taste in music. Lately he has also been earning plaudits for his production skills with some truly outstanding releases.

Recently he has released on some key labels including Lumberjacks In Hell, Street Edits and Dopeness Galore. His tracks are steeped in dancefloor groove, music made by a DJ with the sole intention of moving that floor.

Rahaan is a producer who has clearly learned his trade via many hours behind the decks studying the flow of the dance-floor and the tracks which have the power to excite and enthral.