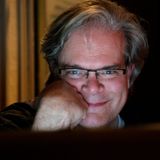 Oliver began to DJ tango in the early 90’s in the club DemoZ in Ludwigsburg, Southern Germany. From the late 90’s until 2001 he broadcast his own Radio Tango show from Aachen. He DJ’s regularly in the Netherlands, and for Encuentros and Marathons internationally. In 2014 he re-started his Radio Tango show, broadcast on Gouwestad Radio every Monday evening at 10 PM.

Oliver’s DJ-sets are dynamic and lyrical. He plays traditional music from the Golden Age of tango, drawing on the full range of styles and nuances from the Guardia Vieja through to the powerfully orchestrated works of the 1950s.