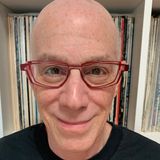 Never miss another
show from Dennis The Menace

Dennis The Menace listened to a lot of legendary New York City radio as a kid. Top 40 WABC. Progressive WNEW-FM. He also won a lot of "guess the song contests" that brought him into those radio studios. At the tender age of 13, (9th grade) he auditioned for and was given his very own "Top 25" show on the first cable radio station in the U.S. Soon after, he was written up in the local newspaper as "New York's Youngest D.J." and that was the beginning of what is now over 45+ years on the radio!

Since then, he has been on the air in New York, Florida, and as co-host of "Music Scene" on KISS-108, Boston. Some of those interviews were also broadcast on the "Rolling Stone Continuous History of Rock and Roll." Starting with the Talking Heads in 1977! Today he is host/producer of two syndicated specialty radio shows broadcast from his Menace Studio in the Hollywood Hills, Music Director of 99..1 KBUU, L.A./Malibu.and founder of music podcast studio/production company PopCult.