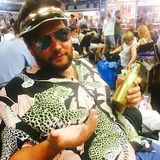 Never miss another
show from Pete On the Corner

Saturday OntheCorner at h-Club, Pete OtC and Mo'min Swaitat
by Pete On the Corner

Pete on the Corner classic dance mix
by hclublondonReposted

BBC 6 Music, Label Focus
by Pete On the Corner

ON THE CORNER RECORDS
by Selector PablerasReposted

Pete took up DJ'ing his eclectic selections whilst on a beat odyssey exploring the rhythms & beats in Africa.When living on the East African island of Zanzibar he graced tropical paradise venues with an eclectic brew of rare groove, afrobeat, funk-soul-jazz & leaden underground electronica.He spun his heady selections in beat dens from Uganda to Burkina Faso.Following his beat pilgrimage he took to curating global rhythms in his Asphalt Safari production for a station in Australia.

He is currently stirring the soundscape of central London with a night of eclectic selections at On the Corner..He was recently a Judge for an Int DJ Competition, has been helping Dom Servini produce & occasionally present his Colourful show. He presents on a London station & is a resident selector & music editor for Parisian culture magasine, Eclectic Society.He has just set up label On The Corner Records & is currently documenting the music of the Western Sahara region.