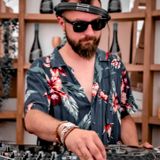 Born in 1989 at the Black Sea Coast in Constanta, Pierre D'Vara grew up with 90s hip hop music. Later, at the age of 12, he discovered electronic music and then began his fascination with the art of djing.

Being passionate about music always seeks to find a bridge between musical genres, hating to be limited to one genre. Always trying to find a fusion between the vibe of funk and disco music from the 70s and 80s and electronic music.

He tries to give a modern view on contemporary styles . Genres such as house, modern funk, soul, nu disco, downtempo can be found in his sets.