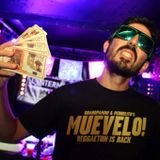 Never miss another
show from Pedrolito

Pedrolito is an Argentinian DJ, party organiser, radio host and a real Reggaeton, Dembow Dominicano, Latin Trap and Cumbia lover. For several years he lived in Mexico where he developed his love for Latin American music.

He is the co-creator of and has been resident DJ for Muevelo parties in Paris since 2011. He’s played alongside the likes of Ms Nina, Tomasa del Real, King Doudou, Los Rakas, Pablito Mix, Villa Diamante, Rosa Pistola, Uproot Andy, and Dengue Dengue Dengue amongst others, as well as opening for Daddy Yankee. As a DJ, he has been invited to several venues in cities such as CDMX, Miami, Buenos Aires, Rio de Janeiro, San Francisco, London, Berlin, Brussels, Lisbon, Madrid, and Amsterdam to name but a few. He is also active in radio as host, DJ and show producer for Rinse France (Paris) and resident DJ for Kiosk Radio (Brussels).