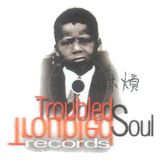 Trouble Back to my Roots 2
by Paul Trouble Anderson shows

Paul started of playing at the time of the Sound System days…
As well as a Dj he was a soundman. He followed Chicken, Scrap Iron and Fat Man Around those days. Paul had a sound from his uncle a reggae sound that was converted in to a soul sound. They called it Troublefunk and this is where he acquired his Stage name “Trouble”.

Trouble was Instrumental in the London music scene, and helped making clubs like Crackers, Spats, The Embassy, Global Village and Electric Ballroom Legendary.
In the mid 80’s he championed His ‘Trouble Funk Sound‘ and brought his sublime blend of dance music to the Warehouse scene.
1985 he was asked to join Kiss and found the prospect of promoting dance music on-air an exciting one. That is when he developed his creativity and skill. To his fans, Paul has an amazing ability to make you want to move, the way he makes the music come alive and his brilliant mixing skills.