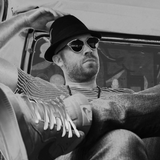 PATRIK STEDT is a Swedish artist who’s been producing and DJing since 2006. First introduced to the club scene at the legendary The Cross in London back in 2001 he knew he would forever be addicted to house music. Fuelled by a solid musical background PATRIK STEDT has released music under various names such as Multifarius and FUTURPOETS with releases on CUFF, Audio Rehab Anabatic, Sleazy Deep, Dear Deer and his own imprint House Of Hustle. He is constantly striving to push an authentic sound with strong influences from Bass House, Chicago House and Ghetto House to promote what he likes to describe as “banging booty house with good vibes”. A successful 2015 with both his artist projects and record label saw PATRIK STEDT play at Ministry Of Sound in London and at the Movement Festival in Detroit. This year he is set to launch his new solo project with confirmed releases on labels such as Audio Rehab and gigs in Europe during the summer.