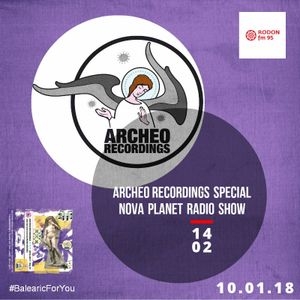 ◉ Archeo Recordings Special on this week’s show as the label released recently a cassette compilation ‘’Archeo Recordings 2014-2017 Vol.01’’ * to celebrating its 3 years of releases. Archeo Recordings which runned by Manu Archeo specializes on releasing reissues of rare, obscure and lost Balearic, ambient, new age, experimental records, firstly from Italy and then from around the world. In the show included more tunes from Roberto Aglieri’s ‘’Ragapadani’’, DJ Nova’s best album re:issue of 2017. In the playlist UPCOMING tracks by The Cruising (I’ve been coordinator of their ‘’Wise And Weird’’ that will be OUT soon on Whiskey Pickle), Hidden Orchestra, Carl Weingarten & Walter Whitney reissue as well and Troels Hammer latest EP among others. TRACK OF THE MONTH Arp Frique’s ’’Nos Magia’’.