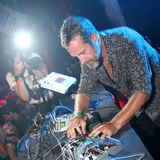 Nolan Gray Live with Gesaffelstein and Brodinski
by Nolan Gray

Eclipse of the soul
by Nolan Gray

Nolan Gray is a Los Angeles-based artist producing bespoke analog techno tailored for the underground, the sound of which has been dubbed “Future Techno.” He is one of a current crop of producers merging the darkened sounds and arrangements of electro with the formal structures and subtlety of classic loop based techno. This synthesis makes it a perfect sound to become the post-EDM genre for a legion of fans tired of big box raves. Nolan Gray describes this effort as a masters study in elegance, “The goal of this music is an exposition of great complexity expressed in the simplest of terms, similar to the fundamental tone of nature.” Nolan Gray’s work is enabled through an exploration of modular synthesis, which he finds to be a natural tool to express that complexity.