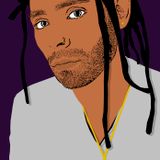 Never miss another
show from No Qualms

No Qualms is one of those rare artists that happens to play all the instruments, write all the songs, and even does all the engineering and production.

His songs are deep and autobiographical with a sound that will bring you back to the golden era of Hip-Hop, where songs were stories.

He is the owner of the City Of Nine Gates Recording Studio & Asharic Records an independent record label based in Sydney Australia.

Besides being a Record Producer, Sound Engineer and Performing Artist, No Qualms is also a DJ.

​He is the host of the Deep Soul Radio Show.

No Qualms has had his remixes and productions released worldwide by multiple artists from D.I.G (Directions In Groove) here in Australia, all the way to Wu-Tang in the U.S.