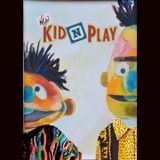 collaboration of two of them who will show to the extent“Spot" and“Sound Source" are astonished from the second half of the 90s goes back to "MOST FOCUS ON MC MOGGYY" released in 2007. From the first, their friendship over ten years, and continues activity. And "Flava of The Month" by New Kid-N-Play was released in 2012. On MIX of DJ GEORGE, this MIX series of a new style to which MC MOGGYY explains a track name and an artist name calls subject. They changed name "New Kid-N-Play" when they released "Flava of The Month Vol.7" in 2013. Based on HIPHOP and mix with EDM that is their new style. Two persons mainly show Trap Music, Moombahton, Base music. Moreover, they start to make edit and original track also. The frame of the genre was removed, and they were formed in order to send newness towards all the music lovers. The now most stimulative duo from whom the trend attracts attention.