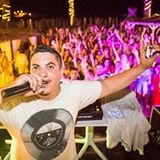 This is Ibiza - Vol 2
by Just DennisReposted

Mykill rockin’ dance floors since 1999.
For the past 17 years Mykill has established himself as one of Malta’s top djs, with residencies at the biggest venues like Café del Mar, Gianpula and all major events by G7, Sunglasses at Night and Whysoserious. On an international level his adventures behind the decks have taken him to play international events exporting his unique dj sets with internationally renowned clubbing franchises such as Pacha, Buddha bar, Isle of MTV and Ministry of Sound in: Ibiza, Dubai, Caribbean Island of St Martin, Qatar, Austria, Amsterdam, Czech Republic, London, Latvia, Slovakia and Cyprus.
Mykill started his musical stint as a guitarist and front man in a punk band in the 90s, eventually swapping his electric guitar for a pair of turntables and a mixer. Working hard and putting in the years to finally establishing his name as an original Dj, show man and crowd pleaser.
Mykill is a party Dj, when he hits the Dj stand the dance floor ignites immediately,