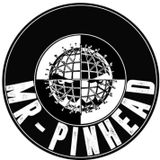 WE FIGHT FOR OUR BLOODLINE
by Mr-Pinhead (MGSS 13)

GET READY FOR WHAT'S TO COME
by Mr-Pinhead (MGSS 13)

Born and raised in Ostend, music has always been a big passion for Mr.Pinhead. Already from early age he accompanied each week his parents to the record-store, learning a lot of different genres and generations of music along the way. When he got older he particularly got passionate by electronic music which lead him to start spinning Acid, Acid-Techno,Tekno ,Core, Hardtek and Techno in 1998. Very soon after he discovered that even other genres were contributing to his mixing and that variation was becoming the main element of his style no matter if it was Minimal, Tech-house, Booty, Electro, Breaks,... . The passion for music kept growing and it didn't take long for him to become a known face in the local nightscene and beyond, bringing his music to party's, clubs and after-clubs (Acid attack, Krush club, Decadance, Bangtraxx, La Scala, Zanzibar, Kozzmozz,...) on a regular basis. 2009 marked the year he started producing but his biggest love will always remain the mixing