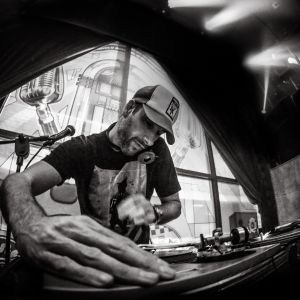 The title of his 2003 debut album says it all: Music For The Mature B-Boy. That’s DJ Format for you, boiled down to the essence. He’s the grown up producer/beatmaker who, admittedly, spends far too long digging for bafflingly scarce records to play, sample, and make you dance.

His five artist albums, featuring rap heavyweights like Edan, Mr Lif, Phill Most Chill, Jurassic 5, and of course long-time collaborator, Abdominal, have been called some of the highpoints in UK hip hop. And his skill in compiling albums and crafting mixtapes has seen him enlisted by the good people at FabricLive, Fania, and BBE, for block party business, Latin funk bombs, and heavy psych sessions, respectively.

More recently a string of cut ‘n’ paste 45s have kept his name in DJs’ boxes. These megamix tributes to the likes of James Brown, Kool & The Gang, and The Meters, are as funky as they were labour-intensive to put together.