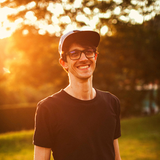 Never miss another
show from MindGroove

MindGroove, DJ from Czech Republic.
Since he was 7 he plays drums, later performs with a local funk-based band. He turns to listening to electronic music in 2006 starting with liquid drum & bass continuing through breakbeat and house to dubstep. Finally he finds himself in deep as well as heavier drum&bass and dubstep.
MindGroove started djing in 2009 and formed his minimal deep rhythmical sound. He is working on his own production but as a perfectionist never had enough courage to publish anything yet. Crossing over breathtaking producers all around the world who are staying unknown, he feels it is his mission to promote these artist coming with deep mixes and started Duneni.cz (basslines) crew with couple of friends, which brings new fresh sound to local environement.
Mixing is an art technique as well as a kind of jurnalism. That gives his mixes a concept and a story.
Check out MindGroove live!