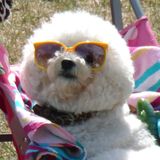 Michael Dog - Afrobeat with a twist of Balearic. Glastonbury 2019
by Michael Dog

Michael Dog was a co-founder and regular DJ at Club Dog and later Megadog, the UK party organisation famous for it's 'psychedelic circus'-styled electronic music events throughout the late 1980's and until the end of the 1990's. He regularly DJ'd at club nights, festivals and venues throughout the UK, all over mainland Europe and across the US and Canada. He founded Planet Dog Records in 1993 and as well as releasing a succession of artist albums and 12 inch singles over the rest of the decade, he curated and mixed a number of compilation albums of original tracks compiled and licensed from demos sent in to the label by a wide variety of signed and unsigned artists. All of the mixes on this page were mixed live from vinyl. Some of the earlier mixes were recorded onto chrome cassette which is why they have fade-outs and fade-ins in the middle of the mix where Side A ended and Side B began.