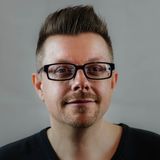 Never miss another
show from Mark_Searby

Mark Searby is a film critic and broadcaster. He is the resident film critic on Phoenix FM radio station in the UK and has written for numerous media outlets including: Heat Magazine, MTV, New Empress Magazine, Entertainment Focus, Flicks And The City, Screenjabber and An Englishman in San Diego. Mark has written and presented video retrospectives on movies such as Serpico, Scarecrow and The ‘Burbs. He is also a seasoned interviewer and has conversed with film industry figures such as Mark Millar, Ben Wheatley, Michel Gondry and many more. Al Pacino: The Movies Behind The Man is his first book.