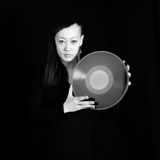 Mieko Suzuki is a DJ, sound artist and music curator based in Berlin. She was trained in classical piano in Japan from an early age on, and in her later teens shifted interest to electronic music. Since 1998 Mieko Suzuki has been permanently involved in the international music scene, and performed in 18 countries across Europe, Asia and the US. Her awardwinning sets and live performances are grounded in deep hauling bass and create a constant tension between the delicate, the raw and the daring. By mixing analogue and digital sounds via the use of effector pedals and often more than the usual two record players or CDJs, Mieko Suzuki creates unique sonic environments that range from club oriented techno sets to experimental approaches heavily relying on field recordings and feedback loops.