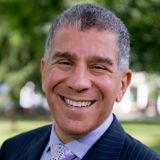 Never miss another
show from The Lorne Epstein Show

Lorne Epstein discusses critical issues on jobs and careers with the intention of enlightening and informing you the listener. Lorne loves people and wants to hear their stories and share them with his audience. The show is broadcast from the studios of WERA on 96.7 FM.

As a thought leader on jobs and employment, Lorne is sought out for speaking engagements, quotes, and his leadership. His book, You’re Hired: Interview Skills to Get the Job, has been sold and downloaded over a half a million times. He speaks nationally on how to ace your job interview and has been quoted on job-related topics in national news outlets such as Cosmopolitan and Forbes.
Lorne lives in Arlington Virginia in his 100-year-old home with his delightful wife Alicia.

If you have a show idea or want to be a guest email Lorne@ElectricCow.com.