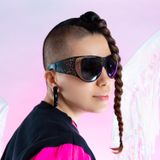 Natalie Murillo (aka La Spacer) is a musician, producer, DJ, live performer, and event producer raised during the 90s in Chicago. La Spacer’s early exposure to house and techno has influenced their pursuit of creating and sharing the experience of dance music, and their focus on experiencing the evolution of Chicago’s house music, Detroit’s techno, and the underground global dance craze phenomenon influenced by these two sister cities at events and large festivals in Chicago, the US, and around the world. Based on La Spacers’ a posteriori knowledge she produces other-worldly hypnotic rhythms with house and techno music as their foundation. In addition to the study and creation of dance music, La Spacer brings her experience into play as event producer. She is a co-founder of TRQPITECA, a nightlife event that started in Chicago in 2015. She is a part of a generation of artists that will continue to push barriers and create space for other underground artists.