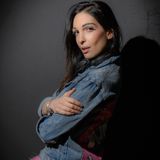 LUCIA T.A @ MAY IN! CHARLIE 24.05
by Charlie MoscowReposted

This is the official Channel of DJ Lucia T.A
Lucia Akopyan better known in the world of electronic music by the nickname "Lucia T.A".

DJ LUCIA T.A plays Tech House, Progressive House, Melodic Techno. Under the influence of famous DJs has been formed her unique style which is able to touch the soul of electronic music lovers.
Her career as a DJ began in 2015. In 2016 she tried herself as a promoter and successfully held series of parties called "In Techno We trust" in Moscow bar.

Lucia plays at such famous Moscow venues as Fantomas, Bessonitsa, Time Out Bar, Mendeleev Bar, Suzuran Bar, Charlie, Incognito.
She also performed in Saint-Petersburg, Voronezh and Krasnodar.
In 2017 she participated as a DJ in GEM festival in Georgia, also been invited to play in Miami in 2018 and 2019 during Miami Fashion week.

Feel free to follow this channel and show your love <3