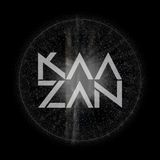 Never miss another
show from KAAZAN

'Kaa-Zan' is a commonly used word in the Syrian dialect which represents two pieces cylinders water boiler that works on diesel and fill the surrounding with its unique noisy sounds once its on.

The word is originated from Bulgar and also modern Tatar 'Qazan' which means 'boiler' or 'cauldron'.

In the Syrian war 'kaazans' are used by the Syrian regime to bomb civilians, filled with explosions and dropped from helicopters, the purpose definitely changed, a weapon of war.... we want to claim the Kazan back in our own way.