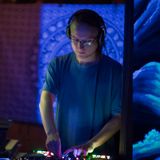 ~ bio ~
Connected with music since childhood, when, being 4 years old, he organized his own cassettes collections, ranging from oldschool berlin electronic music, ambient and psychedelic rock to classical music. Allthough he studied piano and sound engineering, his approach to music was for a long time mostly receptive and collecting. He discovered psytrance and it's branches in year 2002 and after occasional visit of smaller parties, he was carried away by OZORA 2010 festival, where he heartily engorged psychedelic culture and it's atmospheres. Then in 2013 he co-founded production/deco crew WizArts, in 2014 and in 2017 became part of Fenix Festival production team.