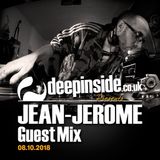 Never miss another
show from Jean-Jerome

Jean-Jerome has cultivated his style to embrace a wide range of musical styles but stays true to the House Music sound.

His passion for Electronic Music has been strongly influenced by Detroit Techno and Chicago and New York House Music.

He is a DJ and Producer in Paris and has been in charge of several radio shows aired on well know French radio channel, RADIO FG for the last 20 years. (1996/2013)