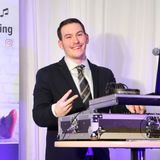 JD Hunter became interested and involved in radio at the age of 6 and has been pursuing it ever since. After learning the art of internet radio at the age of 10, JD hosted a weekly online show entitled "The DJ Jeremy Hour", which had hundreds of listeners per week. After going through the SAIT Polytechnic RTBN Program majoring in Radio, JD moved up to Fort McMurray to begin his career with 91.1 The Bridge, formerly known as KAOS 91.1.

During his time in the Central Alberta region, JD became close with DJs in Red Deer and area and began actively doing Weddings, Bars and Special Events. This is where he began to hone in his skills for beat mixing and mashing of music.

In Fort McMurray, JD's became the resident DJ for Earls Kitchen & Bar. Through this collaboration with Earls, Friday nights were the most popular night of the week.

JD Hunter has since relocated to Central Alberta where he pursues Freelance work as a DJ, MC, Radio Programmer & Announcer & Public Speaker.