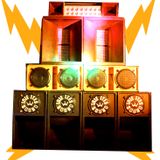 It all started when in 1999 TOPPA and RAZOR played first ragga/dancehall shows in a small club called Querbeat in our small city of Kassel, Germany. Our friend ASHA joined the crew in 2001 when the first IRIE ITES party's took place in SPOT Kassel. The original members of the crew were TOPPA, ASHA, RAZOR and PACO D.. Together they established the first Reggae scene in the area and started touring through Germany. Later, around 2004, Selecta GEASY, COLTJAH and MC FUNGI & BABA MESSAGE joined the sound until they split up in 2008 and it became quite calm for some time. In 2010/11 Selecta SENSI I and DON MYKAL joined the crew and due to the "Roots Department" party series the Kassel reggae movement gathered new power and vitality. These attemps where crowned by the setup of the original IrieItes Soundsystem Stack in late 2013. Also our long time friends RALL-FI & DUBIOS became active members and since then together they strive for the best possible reggae experience! www.irieites.de