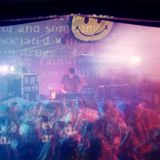 Herbal Tea Party ran from 1993 - 1997 and was at the forefront of the UK Techno and live electronic music scene featuring a live act each night and some of the biggest and best UK and international DJs.
It was a favourite club for many of the DJs and acts that played there.
Orbital chose the Herbal to warm up for their Glastonbury headliner and Andrew Weatherall for his band Sabres of Paradise to warm up for it's Primal Scream Tour.
It's home was the New Ardri in Hulme, with a number of all nighters at Rockworld.
Check out the Herbal Tea Party facebook page for flyers, tickets, reviews, photos and videos.www.facebook.com/HerbalTeaParty23/