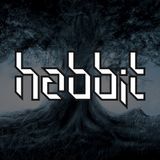 Never miss another
show from Habbit

the nursery of errors.

if not resisted, soon becomes necessity.

Habbit gained Central Florida's attention as a Dubstep DJ but quickly proved there were no boundaries within the genres of EDM. Habbit's musical progression is designed to give the audience the feeling of struggle and achievement to gain knowledge and feelings that didn't exist before. His theatrical high energy performances create an environment where music is a visualization process that appeals to multiple senses. His dedication to progression and never merely adapting to the scene or blending in has kept him focused on creating new styles that then become the norm for others to play