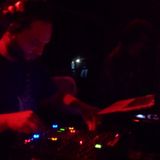 BOOKING:
intdeepsequence@gmail.com
CONTACT:
https://www.facebook.com/guyvandergraaf
-
Resident Dj at WAVES Radio.
-
Guy Volpi aka Guy Van der Graaf, was born in Jordan.
His musical experiments began with House Music and Underground in Rome and in 1992 when he moved to London, he was introduced to Jungle and Drum&Bass. The eclecticity of his style has its roots in Progressive Rock from the 70’s, Funky and Pop from the 80’s alongside Classical Indian music, to which, he dedicated 5 years of intense study in Tabla in the city of Benaras, India, with Guru, Lacchu Maharaj..
For years he performed as a Dj in the main alternative venues of Goa (India) such as the 9Bar, Club West End, Hill Top, UV Bar, Bubble Brunch, Elephant, Hippies Club, Cat's & Soup, Curlies and many more.

Today he lives in Rome and continues to work with music.