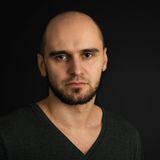 Never miss another
show from Gruia

Coming up from the new wave of Romanian electronic music, Gruia is a Bucharest based DJ and producer/remixer mainly influenced by his traditional and contemporary musical background.

Starting his activity back in 2006, Gruia has built a substantial discography with releases on major labels such as VIVa MUSiC, Trapez, Clarisse or Circus Recordings and a frequent presence in relevant electronic music charts based on tracks like The Ritual or No More Drama.

For the past three summer seasons Gruia has been an Ibiza resident, drawing inspiration and experience, performing in notable locations around the Island such as Sankeys, Bora-Bora or Es Vive and being a guest to major stations such as Ibiza Global Radio and Ibiza Sonica.

With upcoming tracks on some of the industry’s major labels, Gruia develops his music determined to leave a particular mark in the local and international scene.