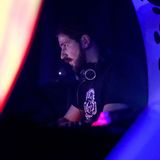 Grove Bear first came in contact with electronic music in late 90 listening to mix-tapes on Compact Cassettes from his elder siblings. When he saw his brother manipulating sound effects on computer for a theatre show he developed a fascination with electronic sound manipulation. Soon after he started experimenting on his own. His first steps in DJ-ing were made with his friend. Karman Energy as they were called, started DJ-ing on drum and bass gig’s in local town. After experiencing OZORA festival for the first time, they embraced psychedelic music and performed in an underground event in Belgium.
After duos separation, Groove Bear’s focus remains in psychedelic music, even though he is still experimenting with other genres like House, Dub Techno and Drum And Bass.
He is also one of the people who first brought psychedelic movement to his local town in Slovenia which later evolved to society Universe.